Where I Found Inspiration For My Writing 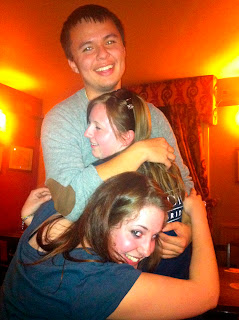 Normally I exam mark over the summer period however this summer I worked for a language school and helped run a student residence, something I've never done before. The building was just weeks old and had a large number of teething problems including lifts not working, the basement flooding due to heavy rain, toilets mysteriously flushing etc. etc. Although the hours could be long and some of the issues frustrated me the experience has fuelled my imagination. I have so many new ideas I just don't know where to start.

Idea one: A picture book story about packing a case that came to me as I packed my bag (I had to stay on site at least three nights a week).

Idea two: Another picture book idea which popped into my head whilst I took the picture on the right showing members of staff saying goodbye to another.

Idea three: Yet another picture book idea which is based on a conversation I had with another member of staff. This one I've already written and sent off to my editor, so fingers crossed.

Idea four: An idea for a non-fiction title which was prompted by a chat with another member of staff. The exciting this is I already have an editor wanting to see the synopsis and it will mean I'll be writing with a co-writer for the first time.

Idea five: With each passing day more ridiculous things happened and I found myself madly scribbling things down in the note book I carry everywhere with me. Now I feel I have enough material for a mad-cap sit-com. I've never written one before but I now have the urge to give it a go.

So next time you're stuck for an idea go and give something new a go. Work outside your comfort zone. Meet new people. You never know it may fuel your imagination as mine has been. Now I'm off to work on the story for idea two.

No Kindle? No Problem